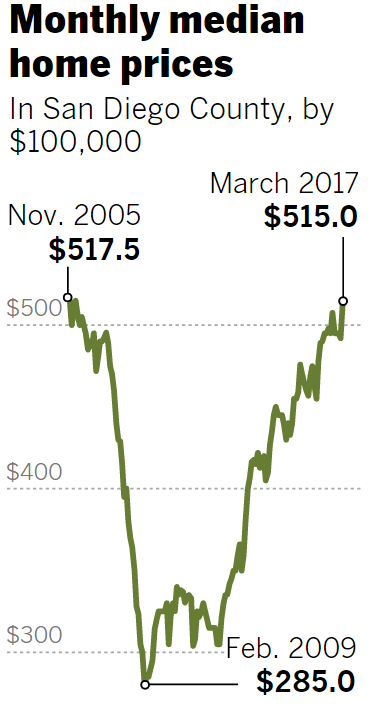 The San Diego County median home price reached $515,000 in March, its highest point in a decade and a 7.7 percent increase in a year, real estate tracker CoreLogic reported Tuesday.

The median price had been below half a million dollars since October last year, which had some analysts surmising costs had hit an affordability wall. But, the March numbers show some buyers are willing to go higher to get homes.

Analysts say a lack of available homes for sale is probably the biggest factor in March’s numbers, but there are other reasons, too.

“Home prices are going up faster than household incomes,” said Mark Goldman, finance and real estate lecturer at San Diego State University. “However, there is a shortage of units on the market. You have a lot of buyers chasing very few properties.”

There were 4,369 active home listings in San Diego County in March, said the Greater San Diego Association of Realtors. That’s the fifth lowest month in its records going back to 2009, a far cry from the more than 13,000 listings in fall 2010.

Also helping buyers are historically low interest rates and job growth, said Alan Gin, economist at University of San Diego. At the same time, he said buyers could be eager to get into the market before higher mortgage loan rates hit or just want to get out the rental game.

“We’re getting to the point where the gap between rent and the average mortgage rate is narrowing,” Gin said.

There are some signs that rent growth is slowing at the same time home prices are rising, possibly a sign that renters are becoming motivated to buy. From September to March, average rent increased just $5 to $1,748 a month. However, that is still an 8 percent rise over 12 months. In the grand scheme of things, a monthly mortgage rate isn’t that far off. Assuming a fixed rate mortgage, with 20 percent down, the monthly rate would be about $1,993 for a median priced home.

San Diego’s market mirrored a trend in March of increased sales and rising prices in California. In the six-county Southern California region, 22,042 homes sold — its highest number for March since 2007.

A jump in sales between February and March is common as most buyers and sellers take the holidays off. This was the biggest increase in sales between the months, 48 percent, in 12 years. Likely because of low inventory, home sales across Southern California in March were 7.1 percent below the average 23,732 sales since 1988.

Andrew LePage, research analyst with CoreLogic, said in his report that heavy winter rains could have delayed sales at the start of the year, and a strong stock market and job growth could be fueling the latest sales.

“It’s also possible that some people moved up their 2017 purchase plans because they feared mortgage rates would keep rising,” LePage wrote.

Cash buyers made up 20 percent of sales in March, the same as this time last year. The peak was 37 percent in February 2013.

Absentee buyers, usually investors who don’t intend to live in their purchases, bought 19.8 percent of homes in March — down 1.4 percentage points from the same time last year. In early 2013, more than 30 percent of sales went to absentee buyers.

Southern California’s median home price was up 7.1 percent year-over-year across the region for a median of $480,000. The biggest increase was in San Bernardino County, at 12.1 percent to a median price of $305,000.

There are indications San Diego County’s market could be heading for a busy summer buying season, said another report released Tuesday. The S&P CoreLogic Case-Shiller Indices, which track repeat sales of identical single-family houses as they turn over through the years, showed a strong San Diego market in February.

The indices, adjusted for seasonal swings, showed San Diego County home prices rose 6.5 percent in a year, the biggest increase in California. It was 5.8 percent nationwide, the strongest increase in 32 months.

Seattle had the biggest increase at 12.2 percent and New York the least at 3.2 percent.

From January to February, the indices — both adjusted and unadjusted for seasonality — showed San Diego prices increasing 1 percent, which was one of the biggest increases in the nation. “You don’t want to put a lot of weight into it,” said Gin, of one-month estimates. “You want to see if that sustains into the future.”

Even though a strong buying season is expected this spring, many analysts, including Goldman, say the market is not heading for a housing bubble because the last crash was built on riskier loans. Prices are rising this time because of lack of inventory and there are stricter standards to get a mortgage.

“I don’t see any speculative value in the market. We’re seeing very cautious underwriting when it comes to appraisals,” he said. “Even though people are anxious to get into the market, it’s not one of those markets where any fool who wants to buy can buy.”

With fewer homes for sale, buyers will have to fight for properties this summer. Real estate agent Miguel Torres Diaz said he recently sold a two-bedroom, one bath townhouse in Spring Valley in three days after getting seven offers. He ended up selling the 1,008-square-foot home for $240,000, $10,000 over asking price.